Back to Short Breaks

This tour features two internal routes not often travelled by the independent traveller but extremely interesting and historical areas. South-East of Rotorua is the Kaingaroa Plain, now covered by the 162,000-hectare Kaingaroa Forest, the largest plantation forest in the Southern Hemisphere. Here the road runs through a seemingly endless avenue of pine trees. In the centre of the region is the Te Urewera National Park, which encompasses Lake Waikaremoana in the southeast and reaches towards the Bay of Plenty. The Gentle Annie Route is now a lot gentler on travellers than it used to be. Here you’ll find picturesque high-country sheep stations like Erewhon and Springvale. Erewhon – “nowhere” backwards – takes its name from Samuel Butler’s influential 1872 novel. It’s an apt name for such an isolated place.

Day 1 Friday 02 October 2020 – HAMILTON TO WAIROA  (D)
Heading south to Rotorua we travel through Cambridge with its olde-world English Atmosphere, and where the area’s rolling countryside is noted for its elegantly fenced horse racing stables and stud farms. The next settlement is Tirau, a highway-side strip adorned with a wonderfully kitsh corrugated-iron sheep, a similarly constructed sheepdog, and a sheet metal biblical shepherd in the grounds of the church.  In fact, many of the shop keepers have enhanced this theme by adorning their properties with further corrugated icons. After a short stop on the edge of Lake Rotorua, we continue east travelling through the Kaingaroa Forest to the forestry settlement of Murupara. Continuing on to Lake Waikaremoana, the 3rd largest National Park and largest untouched native forest in New Zealand. Passing by Tuai, which is the centre of the Waikaremoana Hydro Power Complex, and Frazertown we travel to our accommodation for the night at Wairoa.
Accommodation: Vista Motor Lodge, Wairoa

Day 2 Saturday 03 October 2020 – WAIROA TO NAPIER (BD)
We begin today by starting our travels to visit the Mahia Peninsula, a distinctive high promontory which separates Hawke’s Bay from Poverty Bay. Mahia Beach and Opoutama have long been favourite summer holiday spots. We then turn back along the coast passing through Waihua, Raupunga, Kotemaori, Tutira, Tangoio, Whirinaki and onto the port city of Napier, with its beautiful seafront position, Mediterranean climate and population barely touching 50,000. The Hawke’s Bay is a fertile wine-growing region that boasts one of the world’s best collections of Art Deco architecture. We stay in Napier for two nights.
Accommodation: Quality Inn Hotel, Napier – 2 nights

Day 3  Sunday 04 October 2020 – NAPIER (BD)
Today we drive along the scenic coast from Napier to Te Awanga and join Gannet Safaris Overland to visit the world’s largest, most accessible gannet colony at Cape Kidnappers, New Zealand. Gannet Safaris has been guiding visitors over Cape Kidnappers for over 35 years. Our safaris are the only way to be driven right to within a few feet of these remarkable birds. There is absolutely no walking required. You will travel in comfort in our air-conditioned 4 x 4 Mini Coach, through Cape Kidnappers Station – traversing riverbeds, broad rolling pastures, through stands of native bush, steep gullies and breath-taking inclines. There is a stop on the way at a spectacular cliff top with panoramic views of Hawke Bay right across to the Mahia Peninsula. The amazing geology of the area can also be taken in. The 36km, three-hour trip includes a commentary by your tour guide/driver on the farming operation on Cape Kidnappers Station and an introduction to the gannets. On arrival at the gannets, you can stretch your legs and take in the mouth-watering scenery from your position at the brink of the cliff’s edge – 100 metres above the ocean. Here your driver/guide will serve you light refreshments whilst you enjoy watching the gannets perform around you. On the completion of our Gannet Safari, we will drive through Havelock North and Hastings before returning to our accommodation in Napier.

Day 4 Monday 05 October 2020 – NAPIER TO TAIHAPE (BD)
Departing Napier, we travel through Fernhill and the Omahu Marae. This route was famously traversed by missionary William Colenso in 1845 when Taihape was merely a bush clearing. In 1867 the first sheep arrived at Erewhon Station and a rough route was started from Napier, reaching Kuripapango and Moawhango by 1883. All the wool from the Taihape and Karioi areas was taken to Napier, initially by teams of bullocks pulling a dray, later by draught horses, though even they took a staggering 10 days to make the journey. It wasn’t until 1919 that motor vehicles took over. The Kuripapango Hotel used to stand where there is now a camping site and from there numerous tramping and hunting tracks lead into the Kaweka Ranges. A side road leads to the isolated Kaweka Lakes. The route then passes Ngamatea Station, the North Island’s largest run holding, before reaching the Ngaruroro River bridge.  As the road climbs there are superb views of the surrounding countryside including the summit of Ruapehu. Then it descends again to the old Springvale suspension bridge over the Rangitikei River. The nearby Moawhango settlement retains remnants of a colonial village with a fine carved meeting house and a memorial chapel. We spend the night n Taihape.
Accommodation: Aspen Court Motel, Taihape

Day 5  Tuesday 06 October 2020 – TAIHAPE TO HAMILTON (B)
Departing Taihape we make a visit to the Waiouru Army Museum which is New Zealand’s most comprehensive Army Museum. The museum showcases our nation’s military history, telling the stories of Kiwi soldiers and exploring our participation in major conflicts worldwide. We then continue our travels to Taupo for your lunch stop before continuing our homeward journey. 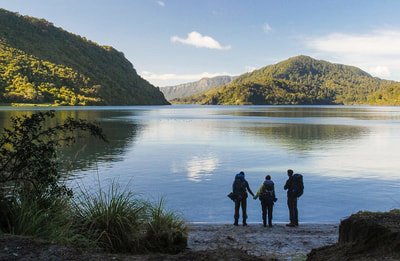